We need to upgrade the approach to solving the traffic flow in the cities for 2030 and beyond. Cities around the world are taking multiple approaches, and widening roads to accommodate more traffic is not the solution.

Several city officials around the world, and certainly in the U.S., were outraged (apparently surprised) when their traffic congestion standings were announced and their cities labeled as some of the most congested cities in the world. The report, released by the data analytics company INRIX, gave cities in 38 countries their unsolicited 2018 traffic scorecards.[1]

Out of 62 U.S. cities named in the report, 33 of them (53%) received worst scores in 2018 than when compared to the previous year. In other words, these cities got more congested, some as far as 20% more congested. Five cities saw no change from the previous year and 24 cities actually got better at resolving the traffic congestion problem; some improved as much as 16%.

Although some city mayors did not completely agree with the report claiming researchers did not take into account the geospatial considerations of dense cities, most of us cannot deny that traffic congestion is a problem in the U.S. and major cities of the world.[2] The truth is that the congestion will not go away by itself, and the forecasts do not speak of a future where the traffic congestion may be better.

Among the many interrelated variables, two problems exacerbate the traffic situation in our cities. First, the population in our cities will continue to increase. See Figure 1 (below). People will live longer and will seek and stay employed longer.

This means that the size of the labor force has the potential to continue to grow, and most of that growth will happen in our cities as shown in the 2030 forecast depicted in Figure 1. As the population increases, people live longer, and decide to stay employed longer, the need for mobility also increases, creating more commuting traffic in the streets of our cities. 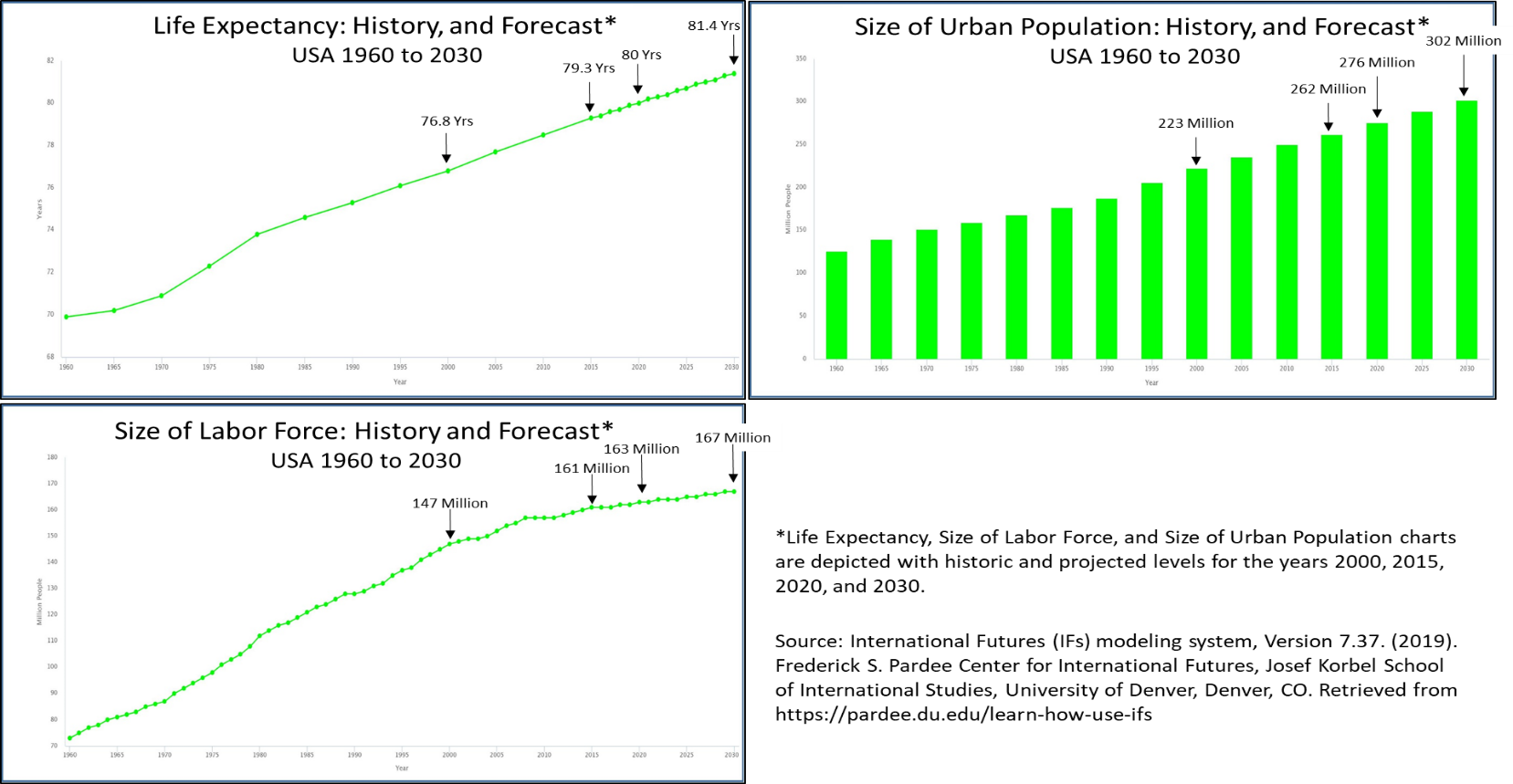 Secondly, solutions and infrastructure that have and are being built to combat the traffic congestion continue to promote the car as the center of the transportation network. Transportation experts highlight, “In the past 100 years, the automobile has shaped the city rather than cities shaping the automobile.” [4]

Experts also note that mass transit was the principal option in the 20th century, and due to the advent of the car, mass transit began to decline drastically in the U.S., something that was not seen in other parts of the world. In the case of the U.S., transit agencies began to slash service costs rather than improving service to stay competitive, driving more mass transit drivers to choose cars instead of public transportation. [5]

The car became a profitable investment, and as a result, today we have plenty of them. Matter of fact, it is estimated that today more than one billion cars exist in our roads around the world, and the estimate is that we’re accelerating the pace towards two billion cars in the world with Asia, Russia, East Europe, and South America leading this massive trend. [6]

In short, this growth is surmounting and cannot be sustainable. Cities cannot continue to be shaped by/or build for cars. The result will be more congestion, city sprawl, environmental decay, and health risks for our citizens. [7] (See also LS|EG analysis “City Sprawl & Systems Dynamics” here.)

Are there any paths toward better solutions?

We need to upgrade the approach to solving the traffic flow in the cities for 2030 and beyond. Cities around the world are taking multiple approaches.

In Sweden, the city of Stockholm began charging motorists who enter the city center during peak hours on weekdays; other cities have resorted to traffic apps, linked to other forms of transportation and integrated systems as a combination of bus stops and cycle parking facilities with metro stations. [8]

Italy implemented the “Zone a Traffico Limitato” (ZTL) in over 200 cities to limit traffic into city centers and historic areas to only authorized motor vehicles. The initiative was aimed to reduce vehicle traffic and air pollution. [9]

We also need to formalize and inspire a call to form strategic alliances and reinvigorate transport network systems. As previously stated, mass transit is an option but it is not well developed, for example, in the U.S., and for that reason, creating support for funding of metro systems that connect to neighborhoods is difficult but not impossible.

In the largest car market in the world (China), the World Bank and the Chinese Ministry of Transport partnered in the development of the Global Environment Facility Program where the World Bank granted funds to selected cities in China.

Strategic alliances can also help reduce congestion in the cities through smart parking initiatives. Most of us who study the patterns of transportation and have been in the smart city space understand that much of the congestion in city centers is due to the circulation of vehicles looking for parking.

A solution some cities are using combines the application of apps that help drivers identify where parking is available and the use of automated parking garages. In Oakland, California, CityLift Parking and Signature Development Group partnered on this fully automated garage initiative.

These partnerships can realize considerable savings for those cities who have public parking facilities, plus the added benefit of considerably reducing traffic congestion in our city centers.

The issue of congestion in our cities is real. It is also a sign of the complexity that exists in the city ecosystem. One can appreciate that the solution must involve a multi-stakeholder approach with varied strategic alliances and partnerships, each synchronized at the citizens’ needs and aligned with the strategic imperatives in the city.

Leaders can benefit from taking a foresight approach for the way ahead. The year 2030 is not too far into the future. Therefore, leaders can begin exploring action on alternatives through a systems-thinking approach to understand the interrelation of all stakeholders.

Then, consideration must be given to the trends and drivers of change that paint the road to 2030 and beyond, so appropriate narratives of the future can be developed, the right futures can be selected, the right alliances can be built, and actions can begin to take place.

The year 2030 can be the future we want, perhaps a congestion-free space where citizens have reclaimed the streets of our cities. But we have to shape that future today.

[7] LugoSantiago, J. A. (2018, November 13). What will the future hold? City sprawl and systems dynamics. LS|EG. Retrieved April 12, 2019 from https://www.lugosantiagoeg.com/what-will-the-future-hold-city-sprawl-systems-dynamics/