Empowered Citizens in the Smart City: Emergence as Theory for Societal Change 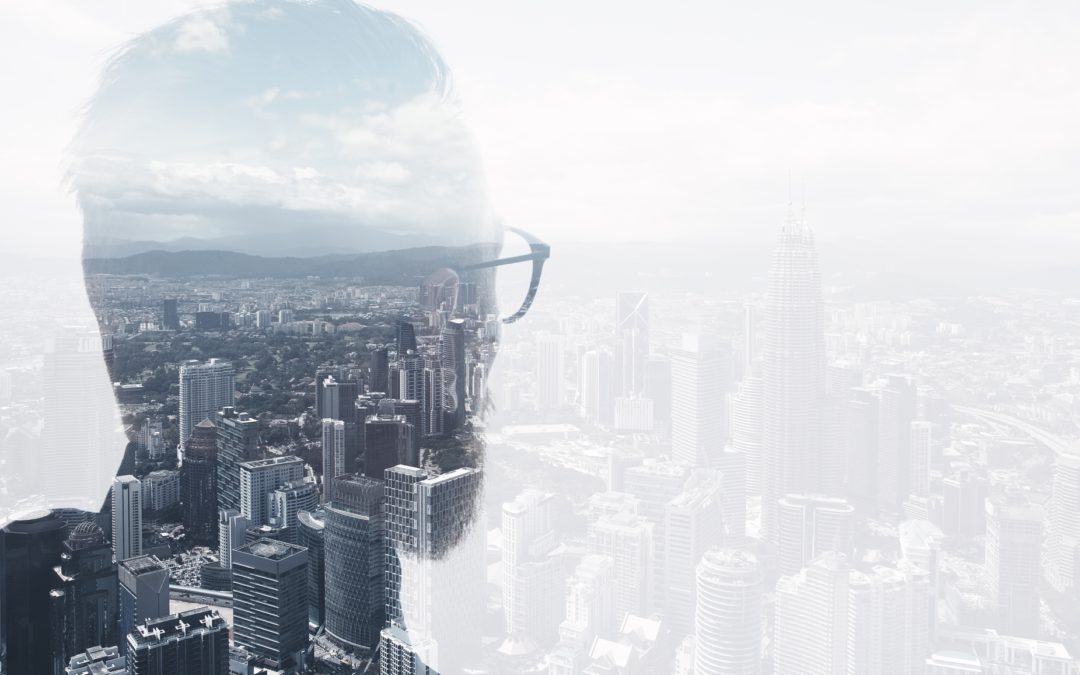 In that future, we see the rise of the empowered citizen. Could it be possible to explain this phenomenon through emergence? How would the Smart City of the future be like if viewed through emergence theory?

Emergence theory advocates strive to make sense of how action initiated by individual actors achieves critical mass, in turn, creating change that could not have been predicted from the analysis of the individual actions of those independent actors.

Change arises from the synergy of multiple actors acting within the same environment. In other words, the spark for change starts at the local level, where all of the actors have a common environment, and the social change rises from the bottom up, rather than dictated from top-down.

Macrosocial phenomena then arise from the actions of many participants. The other condition is that emergence unfolds through resonance, the synchronization of what sociologists call “habitus”. [1] In this habitus, social agents synchronize patterns of dispositions, normative logic maps, and form shared contextual knowledge, and once the combination of these exceeds a certain threshold, the right conditions arise, creating the trigger for change.

But what does all of this mean in terms of the empowered citizen in the city? The U.S. National Intelligence Council’s 2012 report on global trends 2030 highlighted four megatrends that produce what they termed “Tectonic shifts” (critical changes to key features of our global environment); among them were individual empowerment, diffusion of power, and demographic patterns. [2]

These three megatrends are complementary and have the power to put citizens in charge whenever ‘habitus’ have achieved critical mass. Figure 1 below explains the relationship using a high-level causal loop diagram. 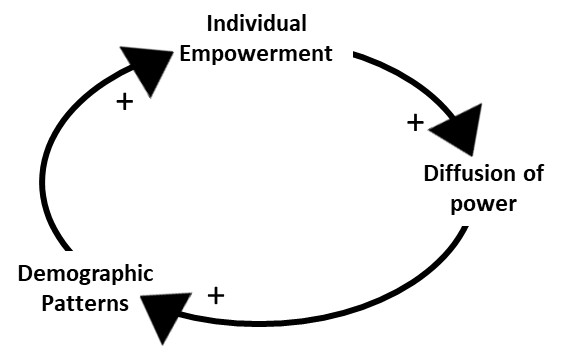 A great deal of empowerment creates influence and freedom to take action. As the council noted, individual empowerment is the most important of these trends and acts as a cause and effect, expanding global economy, widespread exploitation of communications technology, and confidence to exercise personal and collective options.

One of those options is the choice to energize communication and social networks to produce change (diffusion of power). Another option of empowerment is the decision about where to live, and how to scale up economically—all of them contained within the mega trend of demographic patterns. This last mega trend describes the explosion of population and its movement into our cities.

This discussion on emergence may also help explain why the actions of the fruit vendor in Tunisia were able to create change (discussed in “The Future in the City According to Technology Theory”). That was an example of an individual actor who exercised a personal choice at the local level. This choice was made in the common environment of thousands of individual actors, activating and synchronizing their moods and dissatisfactions.

In fact, this process created synergy (shared contextual knowledge) and then empowerment. And once empowerment exceeded the threshold of discomfort, mass empowerment changed their shared logical outline of what the future should look (a new one emerged!). This synergy, empowerment, and emergence of a new future created the right conditions to trigger diffusion of power: mass massive mobility towards something new (societal change).

Although emergence may help explain the arrival of the empowered citizen, not everyone agrees with the use of this theory to explain the societal change. The first argument is that this theory of emergence (or complexity) was first used to understand the behavior of complex adaptive systems in science, in some instance at the molecular level, and was later used in the computational modeling of complex systems.

Can emergence be used to make sense of human behavior and patterns in society? Experts claim that citizenship cannot be determined by algorithms and that citizenship should just be allowed to flourish through critical thought rather than trying to define it via economic and software parameters. [3]

The Future in the City According to Emergence Theory

When we think about the future through the lens of emergence theory, we can see the following. The advent of AI that can speak and write as humans do, the proliferation of fake news, the continuous connectivity to smart devices, and the need to satisfy the human longing for purpose will drive communities to grow closer. Community-driven citizen groups will be the balancing force between the self-interest of businesses, the action of government, and the improvements in citizens’ quality of life.

Spirituality, growing as a megatrend, will drive societal change within cities. [4] This trend will change how the space is used during urbanization and gentrification processes, creating and standing green zones in the city where citizens can be in contact with nature and others. They will also demand that the local government take proactive action to safeguard the environment and will use their collective influence to punish those organizations that act on the contrary.

Technology will be an instrument of social change but not its central driver because citizens will be wary of technology creating exclusion zones, inequality, and eroding their collective will.

Nevertheless, technology will be critical in forming social networks to spark the emergence of a collective societal conscience that will be translated into integrated action to build community harmony and align value systems with a more world-centric thinking.

In that sense, social media will continue to grow into forums where citizens will bring issues to activate community action, in close coordination with the formation of representative groups in the communities.

Citizens will demand that governments put more power in the hands of people and communities. This democratization of the city governance will drive change in the structures of government.

Therefore, the government will adapt to structures that flex responsiveness to citizens’ concerns, similar to the initiatives done in Madrid, Spain where citizens propose how city funds will be expended as well as how issues will be debated and resolved. [5]

This citizen empowerment will be organized power in local groups of citizens. Some of these groups will normalize the behavior of what is acceptable in terms of what is healthy, what values are socially acceptable, slowly changing the old norms and replacing them with new ones.

Because citizens belong to a collective group and can hardly think of themselves excluded from a reference social group, they will be driven to compel to the norms of that group, limiting citizen action that is not part of the collective thinking. Social media will continue to aid in this process and used as a process to rebuke anyone breaking the collective conscience.

Market economies will become more localized due to the tendency for smart cities to become more independent, self-sustaining, and citizen-centric. Leaders will hone civilizational competencies [6] in order to deal with the diverse culture layers that will be a fixed feature of the landscape of smart cities.

[3] Datta, A. (2016, June 9). Three big challenges for smart cities and how to solve them. The Conversation. Retrieved  https://theconversation.com/three-big-challenges-for-smart-cities-and-how-to-solve-them-59191.